In honor of Aniplex’s recent announcement of a new Read or Die (“ROD”) Blu-Ray box set I thought it was high time to review the television series.  The box set itself deserves a mention, all 26 episodes of the Read or Die TV, the 3 part OVA and a booklet, all supposedly identical to the Japanese Blu-Ray box version.  Then there is the price, $159.98 for pre-orders!  A few years ago I thought $80 for a series was horrendously expensive, but this is just ridiculous.  As another fan mentioned on Aniplex’s facebook page, “the year 2000 called and it wants its single season anime pricing back!”  So unless you own the Geneon DVD release (you’ll have to pry mine from my cold dead hands!) be prepared to order it on Netflix.  And order it you shall, because this is honestly one of the best anime out there.

I suspect that most readers are familiar with Read or Die from the original OVA, but if not the show revolves around “paper masters”.  Each paper master can manipulate paper, making it hard as steel or transforming it into a giant flying beast.  The fights in the series are pretty amazing, paper blades and paper arrows fly everywhere along with the more standard martial arts moves.  If you want action packed, beautifully choreographed fights this show is a good choice. 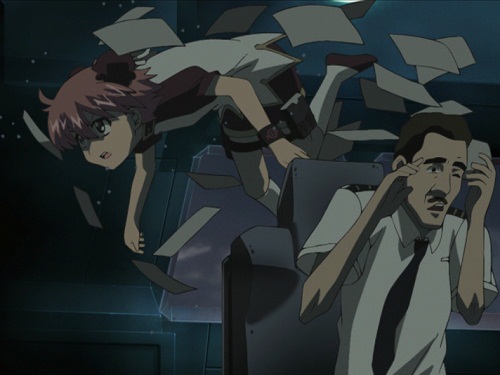 Each character has a distinct, engaging personality.  Each has her own fears and loves, hopes and dreams.  The show focuses on the theme of family where the members protect and support each other.  It pushes this theme beyond the usual flesh and blood relationship to examine what makes a family important.  The non-action scenes are a large part of the show and Read or Die does not shy away from episodes without any action at all.  When the show does put the characters in peril you actually care what happens to them.


If you did see the OVA (a prequel to this series) then you’ll see a number of familiar faces.  Luckily, the series gives the new characters time to establish themselves in the first half of the series, as the second half is dominated by the old guard.  The plot gets difficult to understand about half way through, by which time most of the major powers (the US, England, China and Japan) have switched from good to bad or back at least once.  Still, the plot becomes clear by the end and the twists and turns keep the show interesting.  So if you have a Netflix account, or a rich uncle who can buy you the $160 Blu-Rays, Read or Die TV is well worth your time.

Not to say I’d buy a show at $160 on Blu (okay, maybe Shin Mazinger) but I’ll say one thing in favor of wacky early 00’s anime pricing: that was the last time anybody was making any money in this business!

It does seem like the Japanese otaku continue to subsidize the rest of us. I checked out Amazon.jp prices for the blu-ray set and (if Google and I did the conversion right) and it was close to $360. Still, we are consumers. It’s not our job to run the anime companies. I think US companies realized that people just weren’t willing to pay $160 for a series when US shows are much closer to $50 max. I mean, Sony can come out w/ the best ipod killer ever but people won’t buy it for 3x the price of an Ipod.
The American anime companies are, at the very least, making money. They’d be out of business by now if they were not.

This is one of the first original anime series I watched, so I remember it fondly. Back then I still listened to the dubs, and even now I can’t imagine anyone but the American voice actress doing ditzy, motherly Michelle.
The series lost its way a couple of times but had a terrific ending. I will put on the first episode now and then; it’s a good example of how to start a series. Two excellent battles and unforced introspective moments. I’m amazed how they packed it all in. Also it has one of my all-time favorite anime lines, as Nenene faces down a homicidal would-be author: “If you’re a writer, why don’t you try killing me with your work?” Ah, good times.
Though I wouldn’t hold my breath waiting for Netflix to pick it up. They’ve been getting sloppier about new anime series. It can’t be that hard to get copies of Toradora, for heaven’s sake.

I agree, the first episode is amazing. I am pretty confident that if a person watches the first episode of ROD he or she will stay hooked at least through the first 10 eps or so.
When I last checked Netflix had the DVDs (or at least most of them). I’m not sure if they’ll pick up the blu-ray. This seems like a perfect series for someone like crunchyroll to stream.

I always appreciate an action show that gets creative beyond the you-punch-me-a-few-times-now-I-punch-you routine.
My favorite aspect is that, yes, they can all manipulate paper, but they all do it in their own unique fashion and even have different proficiencies depending on the type of skill. It’s been awhile since I’ve seen the show, but the opening plane sequence still stands out vividly in my mind. Right off the bat, it sets the tempo and greets the viewer with its brand of kickass.

Hoo… I’ve never even considered checking this series out, I think it’s time to start considering. Not that I’d buy it before I’ve seen it, but I’m sure somebody has subbed it. It sounds very interesting, though the family theme has been done to death in anime.

I think you’ll like the way the creator’s handle the family aspect here. It just seems much more believable than in other series.

I’d say the second half of the series is a mess and I don’t think I’d get much of an argument from the creators on that front. As it aired it was dogged with glaring production mistakes in the second half. I think they cleared most up post-broadcast, but the issues with pacing are still there.
If it had ended after the assault on the Hong Kong HQ it would be the classic series that captured the mix of shoujo high school manga and 60s British telefantasy they were aiming for.