Welcome to yet another autumn run-down! Everything is loosely ranked into a makeshift top 10 and we’ve tried to keep our impressions short and to the point, but if there’s anything you want clarified, feel free to question us (and our opinions) in the comments. We’ve missed out certain series because they are sequels to things we haven’t seen (or indeed, dropped in the past,) but I hope this at least gives you an idea of where we stand with the new anime season (don’t forget to vote in our poll, too!) 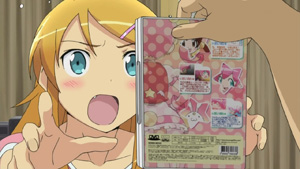 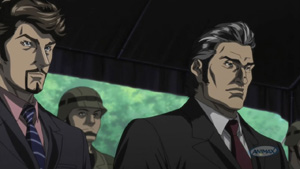 10. Ore No Imouto ga Konna ni Kawaii Wake ga Nai (Oreimo)
When I sat down to watch this show, I was totally prepared for it to offend me on a million different levels.  I was surprised that the show not only ended up being only mildly offensive, but also really boring. Nothing interesting happens in the story and the show failed to make me care about the characters.  My recommendation if you want an interesting, offensive show: skip this and head straight to the recently finished Seitokai Yakuindo. (0 out of 3)

I wanted to give this a shot, but in the end, I just couldn’t even bring myself to watch it. Sorry guys.

I read some reviews, and saw some screencaps, and was kind of curious. But I have a feeling it’ll make me contemplate jumping off a bridge, so I’ll refrain.

The first episode of Iron Man felt like a huge waste of potential. Outside of Japan, it was probably the most anticipated series of the season, yet the finished product smacks of apathy. I’ve enjoyed director Yuzo Sato’s other series (Kaiji, One Outs) but here he’s a square peg in a round hole. The woeful character designs have that chunky, post Yoshiaki Kawajiri look that’s regularly shoved down our throats every time Japan and the US try to make anime for the West, but unlike say, Ninja Scroll, the characters here just look constipated. You failed, Marvel; this is cheap and soulless. (0 out of 3)
The CG looked good but it was wasted on fights that finished after just one laser blast.  I also disliked most of the new characters.  The female reporter felt particularly gimmicky, like a pale imitation of Lois Lane.  I haven’t given up on the show yet, but Iron Man needs to quickly ramp up the plot or most viewers will lose interest. (0 out of 3)
The mediocre 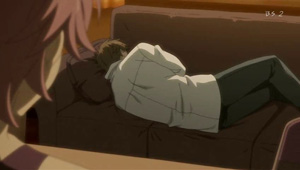 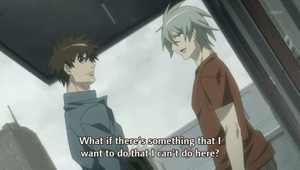 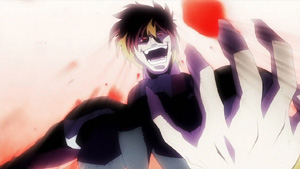 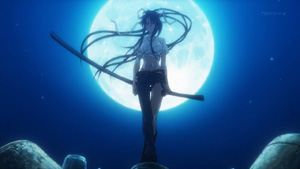 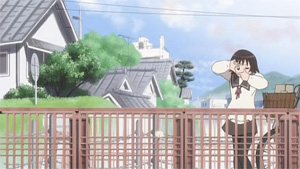 The better you can manage your expectations, the more likely you are to enjoy something. I wasn’t disappointed by Psychic Detective Yakumo, but I also can’t honestly say this was a good episode of anime. It was just par for a Bee Train series, which is to say; low budget, slowly paced and very serious. I happen to have a weakness for this style of storytelling, but I’m not blinkered enough to think it’s anything more than a mediocre first episode. The titular Yakumo is a moody bishounen school boy who has the power to see dead people and finds a pretty girl in need of his help; angst abounds, as you imagine. It’s like a much darker and cheaper-looking version of Natsume Yuujinchou. (1 out of 3)
7. Togainu no Chi

The first episode of Togainu no Chi was better than expected, but given I was expecting tripe, it’s probably best just to chalk this up as yet another fairly average new series for now. It reminded me a lot of Jyu Oh Sei in the sense that both are about young men isolated from society and forced to survive in a grown up Lord of the Flies scenario, which is quite exciting, but it’s also like Jyu Oh Sei because there’s a veritable feast of blood-lusting pretty boys and homo-erotic subtext to digest. (1 out of 3)
6. Super Robot Wars OG: The Inspector

I really enjoyed 2009’s Shin Mazinger Shougeki! Z Hen; although it sports an intimidating amount of mythology, the story was crafted in a way that made its many references to anime of yore more endearing than baffling. My experience with the first episode of Super Robot Wars OG: The Inspector wasn’t quite as smooth. The first 5 minutes or so are great fun; an apocalyptic scale, mecha pilots screaming at each other, twisted metal and huge explosions, but things soon calm down and it lost me; the plot is way too labyrinthine for a newbie like me. (1 out of 3)
5. To aru no Majutsu no Index II
Another fairly storybook episode of To aru no Majutsu for the beginning of season 2.  The first episode preached the overused moral that there is a right way and a wrong way to fight for someone you love who is in trouble.  It didn’t even include any character development or plot advancement apart from a vague scene after the credits.  If you want to get into To aru no Majutsu don’t start here. (1 out of 3)
4. Tamayura

Actually, the first episode of this aired before even writing the preview, and I have to say it was… well, it was average. I may take another peek at in the future (well into the future perhaps, when I can marathon it all) since the main character is a girl with a camera, and this is highly relevant to my interests, but I highly doubt it’ll do more than mildly amuse me. (1.5 out of 3)
The good 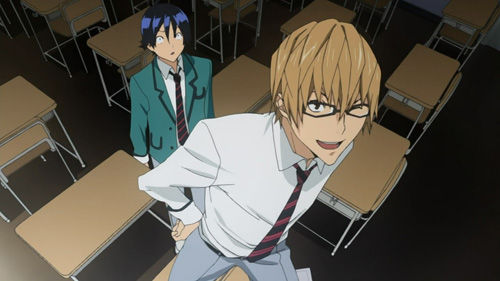 Having had a week to reflect, I can only conclude that the first episode of Bakuman is average. It’s a more realistic take on a familiar story, that of a couple of school boys aspiring to become mangaka. It’s introspective and emotionally driven and I got quite into it; the boys were interesting and sympathetic, but the main female character is quite, well, objectified. I’m not sure why her presence feels quite so stark and annoying, but there’s a strong sense of unbalance between the three that undermines an otherwise promising debut. (1.9 out of 3)
I think this show has a unique and interesting concept, but I’m concerned it will drag on and grow boring over the course of a season. I really empathized with the main character’s apathy and his frustration at being unable to break out from the middle of the pack. I’m a little bit more optimistic than bateszi that the female main character will fit in once she is developed a bit more. My biggest concern is that a story about becoming a mangaka won’t stay compelling for the whole 25 episode season. Still, I thought as a first episode this was a strong effort that accomplished its goal of making you care about the main character from the outset. (3 out of 3)
2. Panty & Stocking with Garterbelt 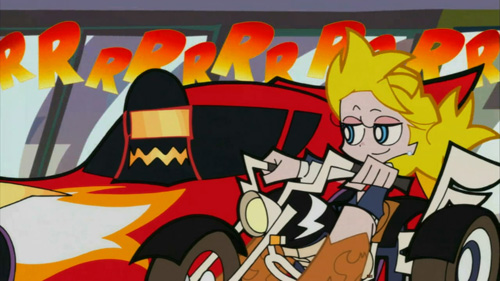 Panty & Stocking with Garterbelt is the most divisive series of the season, representing a lot of what large swathes of anime fans tend to abhor in Western animation. Putting to one side the visuals for now, the humour is dirty and there’s no sense of plot or character development to chew on; it’s just intended as fun, and fun it is. As long as you’re willing to ignore any conventional notion of what an anime series is supposed to be, you’ll enjoy this; I mean, god, it even has animated sound effects! It’s so eccentric, but what else is there to say? It’s as superficial as it looks. (2 out of 3)

Panty & Stoing with Garterbelt was always going to be a little bit out of left-field, but, as I suspected, 22 solid minutes of DJ Taku music makes this more than bearable for me, it’s outright enjoyable. The key to watching this anime is to not pay the plot any mind. The plot is simply a vehicle for experiments in visual representations and meanings (note the different animation styles between the ‘transformation’ sequence, the overall plot of the show, the animated soundtracks, and the destruction of the baddies at the end.) and the syncing these with music to create an audiovisual reaction in its viewers. I kind of enjoy the show as a rather intelligently done experiment in this respect. Also, a slut in anime who actually amuses me! (2.5 out of 3)
I suspected from the beginning that this would not be a show for me.  From the beginning the animation style really put me off, it made me think of the Power Puff Girls.  I understand that the show wanted to push boundaries and it certainly did that, but I also didn’t enjoy the result.  (1 out of 3)
The excellent
1. Star Driver 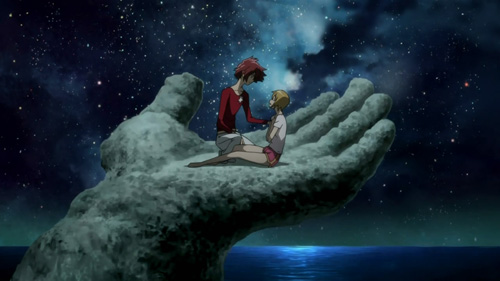 After seeing the character designs, I have to admit I was worried about Star Driver – they looked awfully stiff. I was worried we’d come away with something more akin to Shiki in terms of animation than Bones’ usual fare; the more loosely drawn style and fluidly animated of Eureka Seven or Xam’d. However, Bones is still Bones, and Star Driver moves beautifully. It’s got a weird, overdone aesthetic that I normally don’t like but am willing to humour. (3 out of 3)

The weirdness of Star Driver comes from writer Yoji Enokido. The lovely kuromitsu (a regular commenter) often points to his involvement in the likes of Utena, Ouran and FLCL, and it’s difficult to watch this first episode without feeling his influence coalescing beneath the surface, stitching things together. I’ve still no idea where it’s all headed, but there’s a sense of control here that has me at ease. I’m still in its thrall right now; the spirits of anime past urging me to believe. Man, I love Bones. (3 out of 3)
I definitely felt the Utena vibe in this first episode, and I suspect that people who liked Utena will also like this show. In fact, I actually liked this better then the episodes of Utena I saw because the pace was surprisingly fast for a first episode.  If only the episode gave the audience a chance to catch up, especially in the second half, I would have liked it more.  (2 out of 3)
Final thoughts

Although it would be foolish to write off an autumn season just 2 weeks old, I must admit that I’m starting to feel like this is the worst I’ve seen since I started anime blogging.
It’s not that there’s absolutely nothing for me to watch, but we’re missing series like 2009’s Kuuchuu Buranko and Aoi Bungaku. In the autumn of 2008 alone, we had Ga-Rei: Zero, Kannagi, Michiko to Hatchin, One Outs, Tentai Senshi Sunred, Toradora!, Casshern Sins and Mouryou no Hako.
Obviously times change, but it just goes to show how much I’ve been relying on Madhouse to keep pushing out good anime year after year and as they are (worryingly) retreating, I’m now just stuck hoping that Noitamina’s Kuragehime comes through. It’s disappointing to feel so apathetic, but out of everything I’ve seen so far, it’s only really Star Driver that feels like something I could come to love.

While it seems Autumn 2010 is thin on the ground, truth be told I can’t find myself to come anywhere near bateszi’s cynicism. If I examine my own anime watching habits over the years, I tend to only keep up with one to two currently-airing shows to begin with – thus, Panty and Stocking with Garterbelt and Star Driver representing the two that show the most promise, while worrying isn’t distressing.
On my recent trip to Japan, a friend of mine told me that the gothic lolitas aren’t around anymore. “Five years ago maybe, but you don’t see too many of them these days.” Simply put, the state of the country’s youth, and thus the target audience for anime and manga is changing. Fluctuations in the volume and types of entertainment available are about as normal as fluctuations in the stock market, it’s simply a matter of when the next peak is, and what new things it brings.
My experience with anime is that the season gets better a couple of episodes in.  I’ve seen a number of shows (like Darker than Black) that started off slowly but finished strong.  So don’t worry if this season seems a little weak.