Skip to the content
Dragon Ball Z, Slam Dunk, Bleach, Hajime no Ippo.  Most shonen series are based on physical activities like sports or fighting.  Surprisingly, the general shonen formula can also work well with a non-physical activity.  In Bakuman,  J.C. Staff and NHK successfully tell a shonen-style story about two aspiring manga creators.  The result is an interesting show that I anticipate watching each week.
If you want a good intro to Bakuman, I’d reccomend reading our Fall 2010 preview.  If a quicky intro will suffice, Bakuman is a show about mangaka, people who draw manga.  The main character, Moritaka Mashiro, wants to follow in the footsteps of his late uncle who drew a comedy manga.  Moritaka teams up with his classmate, Akito Takagi, and the two set out to  write a best-selling manga that they hope will eventually get picked up as an anime series.  For added incentive, Moritaka promises his high school crush, Miho Azuki, that when he hits it big he will marry her.
As I mentioned earlier, I think a shonen series succeeds if it gets me excited about the next week’s episode.  As much as I hate certian other parts of this show, it certainly passes my shonen test:  I really want to see next week’s Bakuman!  In fact, I already care about the characters and I want them to succeed.  The subject area really helps here as well.  Although I have no idea whether Bakuman accurately describes the process of writing and drawing manga, it is convincing enough that I enjoy when the show talks up the awesome G-Pen (your guess is as good as mine!).

My biggest issue with Bakuman is its outdated treatment of women.  The show continually makes women look like pushovers.  The desires of the female character are usually petty or misguided.  When Moritaka’s mom tells his dad that she does not agree with Moritaka’s decision to become a mangaka, his dad responds  “Men have dreams women wouldn’t understand.”  I don’t know if Bakuman is intentionally denigrating women or whether this is indicative of how Japanese men treat women.  Either way I wish the creators were more enlightened. 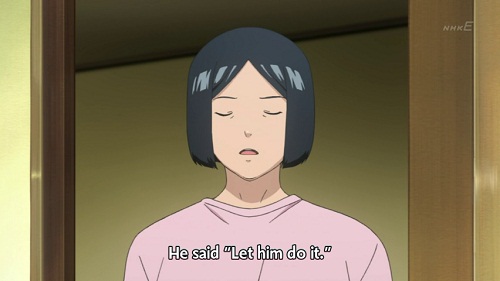 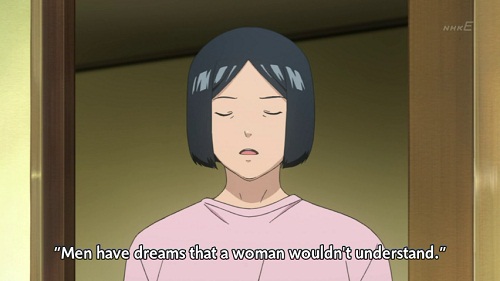 I am willing to give this show a couple more episodes to see how it develops.  I like it when the show explains the process of creating manga and what goes on inside a manga company.  These informative parts of the show help me get past the boring bits where the show explores Moritaka’s relationship with Miho.  Plus, whenever the show starts getting stale, it does something fun like introducing a crazy rival mangaka, Eiji Nizuma, in episode 7.  So if you like learning about manga, or just want a new shonen series to latch onto, give Bakuman a shot.

Nice post. You hit on the things in Bakuman that interest me, like the process of creating manga and the challenges newcomers face, and then there’s that questionable treatment of women …
I especially liked the interview with Hattori(?), the editor. He gave an honest critique that made a lot of sense. I had thought that the boys’ refusal to criticize the other’s contribution was a mistake, and it was brought to light here. Like you, I don’t know if the show is an accurate description of the manga production world, but it FEELS like one. That’s good enough for me.

I thought the editor had potential as well. I wonder whether he actually submitted the manga that the kids gave him. The show left it ambiguous. If he didn’t that is a little sleazy and his reason for not submitting was weak. But if he did submit and the comic didn’t win, then that’s okay.

I’m still torn. I love a few of the classic shounen ‘tournament” shows like Ippo and Hikaru no Go, but after 3 episodes of Bakuman I couldn’t handle the absurd romantic angle, the uninteresting love interest, or Akito’s hyper-enthusiasm. And yet I WANT to like this… must the solution always be to lower my standards once again?

Or just skip the boring parts. I don’t think you will miss much if you fast forward through the “romantic” scenes. If you pretend those scenes are filler you can justify it.

With the entire manga as of now read, I’m still not sure if the way that this manga presents women is:
1) actually earnest
2) some kind of meta-commentary on female characters in shounen manga
3) earnest, but then later on they realize how awkward this is and try to fix that
4) some ham-handed way of making a point
5) a somewhat too-subtle way of making a point
1) is what you pointed out
2) comes from scenes like one where they are brainstorming the characters for a manga and decide that it needs a “the girl” character in the team. Not a female character, mind you. A “the girl” character. And they also decide that she doesn’t need a personality and just needs to be pretty and dull so that the reader can project onto her
3) comes from how there are definitely multiple times where characters point out for example that Mashiro and Miho’s whole relationship is really weird and creepy.
4) comes from how 3) doesn’t show up for a while (maybe like 60 chapters?) so the balance isn’t exactly in its favor
5) comes from how they don’t always explicitly point out some of the subversive stuff. So the “girls are poopyheads!” side gets stuff like how characters are explicitly saying stuff earlier on about how smart girls are stupid because they don’t realize that boys hate smart girls, while the “a lot of this shit is really problematic gender-wise” gets things like how we’re just supposed to assume that it’s creepy how a lot of male characters think that they are entitled to some of the female mangakas that are also trying to get published in Jump/Jack.

Did you get the sense that the manga got better or worse after the beginning? One friend of mine who read most of it said that it lost steam as time went on.

Funny, that’s exactly my issue with Bakuman; I find everything about the Manga process and the harsh realities of the industry fascinating, however as soon as women come into the series things start to fall apart badly.
It’s true that anime is hardly famed for it’s realism, but the sickly sweet love promise between Moritaka and Miho infuriates me – the whole “let’s only talk by e-mail until your manga is an anime” thing just seems too ridiculous and compromises the more believable aspects of the show. Miho as a character also seems generally flat and predictable, being used as a plot device rather than an interesting personality.
That said I’m being way too critical on a series that’s only 7/8 episodes in, for all I know this might be completely turned around a few episodes on. I do remember having similar feelings on Death Note though and characters such as Misa who are continuously obedient to men (mostly light) existing almost exclusively to advance what is effectively a mans story.
…And after all that griping I’m still enjoying most of it…

Death Note was crazy enough that I just suspended my disbelief. Bakuman is too realistic to for the crazy romance to work. I’m doing my best to ignore that part of the show for now.

This manga took my interest, I like the part when Moritaka said that he will stake his life to become Mangaka.
Very determined character.