Skip to the content
Black Lagoon’s original run impressed me. The  show was beautifully animated, included an interesting cast, and had enough violent gun battles to give a child nightmares.  I also think it had the best crew of any recent show.  What it lacked was length.  Its 24 original episodes, stretched over two seasons, were fun to watch but the ending of the series did not provide enough closure.  It felt more like a season finale than an episode meant to wrap up an entire series.  Luckily a new OVA (a straight to DVD released) named Roberta’s Blood Trail was released in 2010.  The OVA starts slow but if you liked Black Lagoon’s first run and can forgive the OVA’s lack of an interesting story you get a treat.
Bateszi has already done a thorough job of reviewing Black Lagoon’s original run.  The idea behind the series is simple: a Japanese businessman named Rock gets kidnapped by the mercenary/pirate crew of the Black Lagoon.  After his company abandons him, Rock ditches his old life and joins his captors.  Rock is the main character of the show but often shares the spotlight with the group’s enforcer Revy.  Revy (pictured above) is a two-handed gun slinger who can rely on her fists if necessary.  Imagine Fay Valentine crossed with GI Jane.  The crew is rounded out by a hacker named Benny and the ship’s captain Dutch. 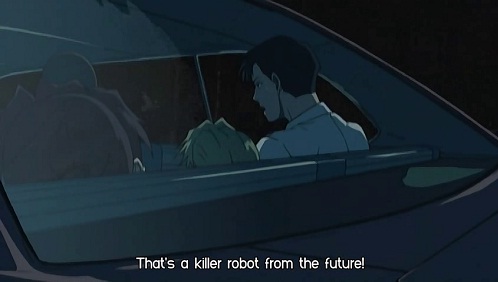 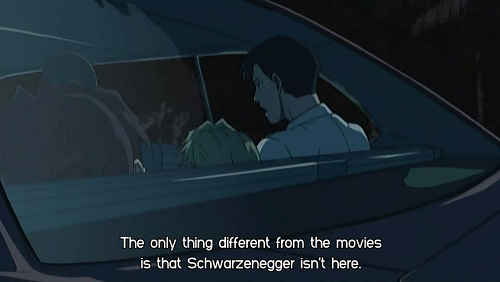 The OVA is a sequel of sorts to an arc in the first season, episodes 8 – 10.  That arc introduced Roberta, a killing machine dressed like a maid, who serves a family of Venezuelan nobels.  In the OVA Roberta returns to south east Asia to avenge her master’s death.  The first two episodes are light on story and heavy on action.  You mostly see Roberta torture and kill her way through unnamed CIA agents and cartel members.  I enjoyed the episodes, particularly the gun battle, but I suspect that the best is still yet to come.
I think the OVA is best understood as a present for Black Lagoon fans instead of a full fledged sequel.  The new episodes lacked the character development that made the first season special.  One of my favorite parts of season one was the relationship between Revy and Rock.  While Rock is originally intimidated by Revy, he eventually stands up to her and the two develop a level of mutual respect.  In the OVA the director misses an opportunity to develop that relationship further.  The result is a beautiful looking episodes that are fun to watch but lack soul.  This might be fixed in the episodes to come, but for now the OVA has not reached its full potential.