Not that this personification of (essentially) a mascot for a brand – branding, in human form – is particularly new to the anime community. The best example I can think of is Di Gi Charat, where the mascots of the Gamers store were beloved to the point where they were given an anime series.
I think what bothers me so much about it  – and I’ll say it again, for emphasis – is the fact that this is the personification of a brand. The idea of a brand, or design, being as evolutionary and participatory is an emerging trend in graphic and identity design. An exemplary example of this ‘generative’ product identity design is the MIT Media Lab’s new identity design.

For the uninitiated (most of you, I assume) the phrase “identity design” refers to the generation of a graphic identity for a client. The identity can be as simple as a logo, and can be as extensive as the creation of an entire typeface. In the case of MIT Media Lab, the designers generated 40 000 permutations of the ‘logo’ – responding to the idea that the MIT Media Lab, MIT’s fly-by-the-seat-of-our-pants creative wing’s ever-evolving mission. Any one person can ‘claim’ their own permutation of the logo.
Hatsune Miku has a similar appeal. We can endlessly adorn her with our dreams. She’s the most relatable brand, and most relatable pop idol ever. The very idea of a Vocaloid – “here’s a voice, go make music” – exists for us to infinitely write with. The reason she’s become so popular is because she’s a blank slate, and always will be. 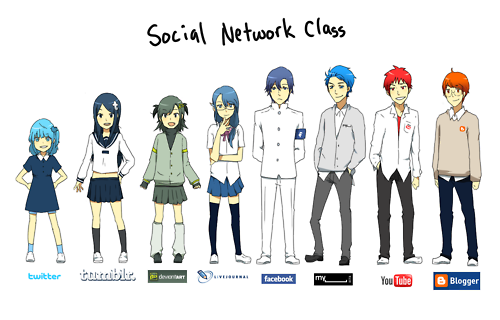 It’s a bit disturbing that a brand can penetrate so deeply, however. And I wonder what it is about the otaku culture that seems to respond so deeply to this personification and characterization of products? Is it an alienation from traditional branding – the ability of a (usually) pretty smart crowd of people to call a graphic designer’s bullshit? That said, I doubt most anime fans have the visual literacy to be able to decode the subtleties of marketing. I think it has more to do with the subculture: the idea that we ‘understand’ a brand, or a product, or a Gamers shop in a way that most others don’t – the character and the nuances of whatever it is we like.
Miku isn’t a new phenomena. We’ve tread this ground before, but it was imperfect. I’m talking about Britney Spears, the Spice Girls, and the Backstreet Boys. Even more so, the new generation of pop stars in America, Hannah Montana and Mylie Cyrus.
The generation coming into adulthood now, and the generation just after us have lived in a word of autotuned, manufactured, branded pop idols for quite some time. Do you know what Britney Spears sings like, naturally? I don’t. I’ve never heard her. I’ve watched her entire career, incidentally, throughout my life; her transformation, her breast implants, her somewhat tragic and embarrassing fall from fame. Britney Spears was a brand more than a singer, and we were reminded of this fact every time we heard her lipsync someone else’s song on stage.
The point is, we only gave a shit when she screwed up. She was rich and famous and dating Justin Timberlake. We wanted her life, and we didn’t care too much about the fact that her music was ‘fake’. We were interested in the brand of Britney Spears: the blanker a canvas she was, the more we could project ourselves onto her.  Unfortunately, Britney is human, and humans are flawed. No one wants that. We rejected this flawed creature.
Hatsune Miku is better than this. Hatsune Miku will never be caught in a Wal-mart. Hatsune Miku will never have feuds with her friends from before her fame. Hatsune Miku will never grow old, never make bad mistakes. Hatsune’s lipflaps will never be out of sync with the music. She follows the ebb and flow of her fans, and is whatever she’s needed to be: a sex symbol, a little sister, a singing, dancing pop idol, or the main character in a fantasy world. We’re okay with the computerized voice glitches. We’ve heard it all before, anyways.