It was around this time last year that I started watching Aria. I loved the first series, but stalled at some point during the second (Aria the Animation.) This week, though, I came back to it.
It felt new to me all over again, that sense of peace so typical of how I’ve felt about Aria from the off. It must be a seasonal thing. It’s just an autumn kind of anime. Neo-Venezia is the land of frozen time, a place where one admires the breeze as it passes through fallen leaves and the way the sky’s reflected by the surface of the water.
The lack of struggle in Aria is perhaps its defining point, but also most troubling. I liken it to drowning in a sea of chocolate. It’s so sweet and happy and nice, but a part of me constantly sounds an alarm. I feel myself being lulled by its depiction of life, but it’s too saccharine to be real. I don’t feel the presence of life in it, but rather, an acceptance of death. It’s like a nostalgic meditation on a long-since lost time and place. It’s fascinating and beautiful, but I’ve rarely felt as detached from the modern world as when I’m watching Aria. 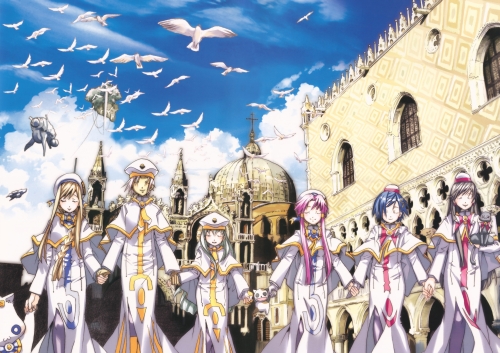 Of course, I’m supposed to feel detached. It’s often described as a “healing” anime, iyashikei or mono no aware, and autumn is precisely the time of year when it’s difficult to ignore the transience of things. Everything around us is changing, but not Neo-Venezia, where life is slow and the people understanding. When the evenings grow darker and flowers begin to wilt, it’s this sanctuary of a land frozen in time; a respite from reality, so peaceful and calming, but a respite is all it should ever be, this place of dreams and ghosts.

5 replies on “This place of dreams and ghosts”

I’ve always wanted to watch the Aria series. Just need to find the time and a good way to watch them.
But see this is another reason why you should give Ikoku no Meiro Croisee another chance. The series is by the same director and it often gets compared to Aria. I am not saying it’s the same since Aria takes place in a fantasy world whereas Croisee takes place in a historical setting,. Additionally there is definitely struggle in Croisee but like Aria its ultimately a heart warming series.
I should stop getting on your case about this! Please forgive me. 🙂

I could try it once I’m done with Aria, some of the same people worked on both shows (Junichi Sato, basically…) I’m predicting you’ll probably enjoy next season’s Tamayura for the same reasons 🙂
Man, I need to catch-up with Natsume Yuujinchou at some point, too. So much good anime still to watch!

And there is going to be a 4th season of Natsume this January.
It seems 2011 has been a very good year for anime especially. There are a lot of things I missed that I need to watch too.

2011 feels like a quality year overall; I can certainly think of a handful of shows that stand out, but in terms of total shows produced, I wonder if the percentage of quality has gone up or not …

I remember that the manga-ka for Aria (or Aqua, when it started) said that seasonal changes were a central thing for her when she came up with the whole idea.
I think there’s lots of indirect conflict in Aria – it reminds me of Yokohama Kaidashi Kikou in that way (though YKK deals mostly in romantic triangles). Aika want to work under Alicia and resents her own senpai Akira, Alice is contentious in general and needs special care, Akatsuki is supposedly after Alicia but will clearly end up with Akari at some future date – everyone’s playing an elaborate, polite game of footsie. And Akari wants to please everyone, the most impossible position of all. OK, its not ‘conflict’, but it is tension –