Though I suppose anatomy of a pose might be a better title for this post.
I’m in love with by this image of Himari. Rather, boushi-san, or hat-san, as Shouma calls Himari’s possessed form. This image, seen in Mawaru Penguindrum’s second opening, Shounen yo, Ware ni Kaere, has been captivating me for some weeks now.
The difference between Himari and Boushi-san in this opening is binary: Himari follows her brothers around, eyes closed and oblivious to what’s around her, while Boushi-san.. … sits eyes forward, leaning in intently. Boushi-san, who, in what the audience has seen alternates from playing around with stalking maids, to presumably engaging in sex with Kanba is perched perfectly on her apple, observing the machinations below intently. This is a posture filled with expectation, and the presence of a being ready to act.
The power of her gaze is magnified when we reflect on the fact that no-one else in this opening looks at the camera directly: 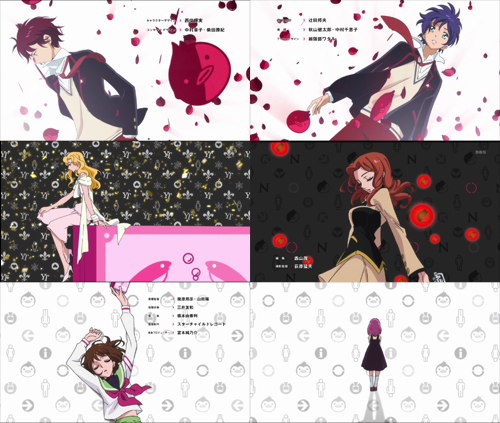 (note: Shouma’s a close call, but he’s actually looking off up-and-off into the distance: here’s a larger version of that)
The other thing that makes Boushi-san such a force in this visually overloaded opening is, of course, the compare-and-constrast aspect presented Dr. Sanetoshi: In comparison to Boushi-san’s pose, Sanetoshi’s pose is nonchalant. Instead of focusing intensely one point, Sanetoshi’s eyes seem to take in the picture at large. He rests, hands in his pockets, and in a considerably more passive pose than Boushi-san, almost as if saying ‘my work here is done, now let’s watch the dominoes fall.’ His Devil-may-care attitude, in comparison to Boushi’s sharp look reminds me of a scene in Mad Men, where the normally commanding and powerful Don Draper finds himself at the mercy of a knee: Sanetoshi is similarly open, unguarded, and unconcerned, though the threat perceived by the audience is palpable.
I find it interesting in an anime all about belonging – particularly focusing on the family unit – these two are the distinct floaters. They have no attachments that we know of and, instead, make a business of making the attachments of others fit into their machinations. Boushi-san possesses Himari to have the Takakura brothers find the Penguindrum for her; without specifying where or what it is. Similarly, Sanetoshi approaches the Takakura siblings because they fit into whatever ‘game’ he’s trying not to lose; the fact that they’re siblings seems to be of importance, as he goes through the drawn-out process of asking for payment before administering the medicine.
Interestingly enough, the idea of Destiny (unmei) being a place that one can itaru – arrive at, reach, come to, etc. – towards, and the fact that Boushi-san comes from the “place at which destiny has arrived at” implies that she is somewhere outside of destiny. Similarly, Sanetoshi, and his grand library under the hospital, seems to be outside of destiny as well, seeing as he appears to have access to the many stories (destinies) of Himari’s life at will. Both characters are placed, somewhat arrogantly, are above the Kiga logo on the apple; and thus, above the machinations the Takakura parents and other concerns of the world.
In the context of the opening, only Boushi-san and Dr. Sanetoshi offer the viewers their eyes, as if we were caught in the middle of a game of chess which could go either way. There’s an electricity as the opening shifts through those final four shots; as if the emotions playing across the character’s faces previously were nothing but a part of a greater scheme.

4 replies on “An anatomy of a gaze”

I had found myself enthralled by these same images from the new opening theme, and this right here is a good articulation as to why. But with your screen-captures I have also become intrigued by those shards of glass around Himari (which we’re seeing in the Child Broiler scenes, as well) since the only reasoning I can think for them is the incident with the mother and the mirror.

It’s nice when animators try to do something ambitious with the opening animation. Too often (especially in US cartoons) the opening ends up feeling like a throw away bit. I’m sad that I never got a chance to watch Penguindrum, I guess I’ll just pick it up when it comes out on DVD.

I wasn’t sure what you meant about the show being about “belonging,” but I hadn’t seen episode 19 yet. Now that I have, I think you have a point, but there are so many themes being flung about that none of them, in my mind, take precedence. Fate/Destiny, sins and curses, responsibilities taken on or thrust-upon. And every visual element seems to have a theme of its own, apples, strings, subways. Hell, even the fact that some things rotate, like those giant apples and the enormous fans (which apparently have stopped and rusted away in the sibling’s backyard … hmm), has some meaning. At the moment I can’t safely say WHAT this damn show is about, or rather, if it can be summed up in a single sentence, if it ever can be.

Nice post! I love those two shots as well! Everything about Sanetoshi and Boushi-sama is ‘electrifying’. Their shots are indeed very well made and establish them as something extra-ordinair among the more mundane heroes of the series. What remains a mystery for me is the level of the shot… they both stare at the viewer at the same level with us and not above us. They are kinda making a mystical deal with us.