Do I have the discipline to <schedule my posts ahead of time>? I’ve no idea! It should be an interesting experiment though… — me, in April

Well, I have the answer now: no, I do not have the discipline! For a little while, I tried, but nothing really sparked. From the moment that I stepped off the treadmill, I just stopped thinking about anime altogether. I guess I just needed the rest. Anyway, my little Spring hiatus gave me a chance to think about how I’m approaching anime and this blog.

For a while now, I’ve pursued mostly new anime and followed along with the zeitgeist. Even if I offset myself by a season or two, I’ll continuously look for something new, something that I haven’t seen before. At the same time, I wanted to rekindle an old idea of mine: Weird Anime, where I’d write and collect 100 word reviews of, you guessed it, weird and obscure anime. The problem that I faced is that I couldn’t remember what some of my favourite weird anime were about because I hadn’t seen them for years and years.

This is the plight of what it means to be an avid follower of visual media in today’s age: there’s always something new and shiny to be excited about, a new season of anime to talk about, and it all moves so fast. I fall into this trap as much as anyone. As soon as I’ve finished an anime series, no matter how meaningful it was to me, it’s strictly consigned to the past and starts gathering dust in the parts of my mind marked ‘Okay to delete’.

Thinking about that now, it seems so silly that I’m essentially overwriting stories that mean something to me with whatever’s hot in a given season. Weird Anime was the trigger for this, but I realised that if I wanted to write about this stuff again, I’d need to rewatch them. Straight away, I went and started rewatching Kaiba (2008) and Kaiji (2007): how could I forget the intricacies of E-Card, or how Kaiji loses an ear, but forget them I did. 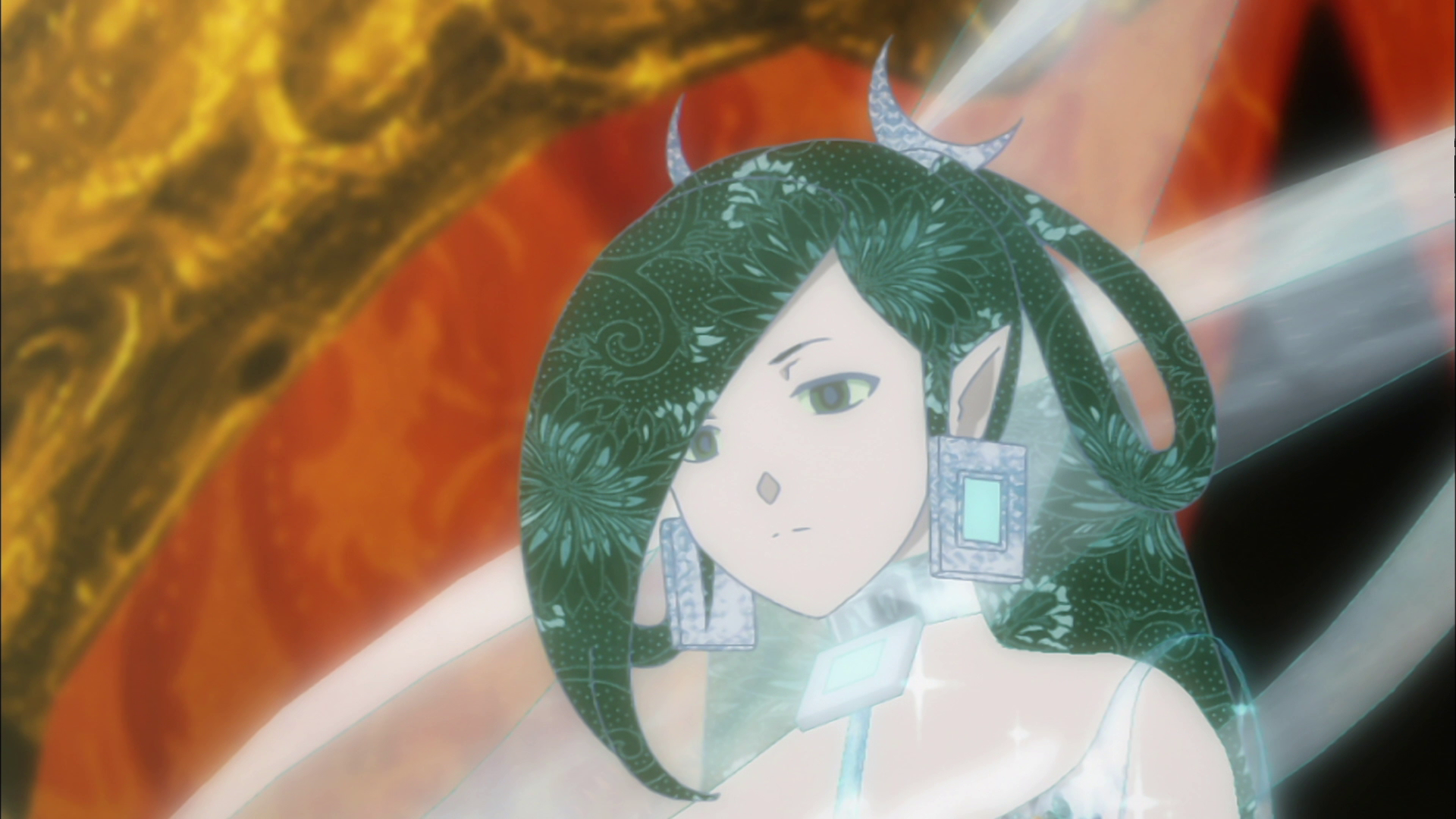 I followed up Kaiji with Gankutsuou and, bloody hell guys, Gankutsuou is totally amazing. Like, who the hell goes and just animates something that looks as unique as Gankutsuou any more? Where did it come from? Looking at it now, it’s a masterpiece, but rarely do I see it brought up in anime discourse. Everyone still talks about Evangelion, but who the fuck is talking about Gankutsuou?

I guess I’m at the end of this post now. If I’m going to impress anything on you, it’s to go look at your anime list, look at what you loved 10 years ago, and just watch it again. You needn’t to worry, because you know it’s good. You know it gets under your skin. Let it. It can still move you.

Gankutsuou is one of my favorite shows EVER, anime or not, and I’m so sad it doesn’t get the respect it deserves. There’s nothing quite like it out there, it has amazing visuals, great characters, a great central conflict, absolutely amazing voice acting (some of the best performances from Fukuyama Jun and Nakata Jouji, ever)… It should be on every Must-Watch list, but barely anyone knows about it nowadays.

I agree that rewatching old favorites in general is always a good idea. I do it regularly, simply because sometimes I want to rekindle certain feelings with certain characters and stories. I’d been rewatching Wolf’s Rain, and it’s just as good as I remembered. (It’s also amazing how great Miyano Mamoru is in it, compared to his performances in recent years… he’s gotten so mired in mannerisms and routines, his performances are so boring now, that just seeing his name in a cast list makes me less interested in any given show.)

About the “okay to delete” thing though, I never really experienced that. If I like a show a lot then I stick with it as long as I can, until everyone but me moved on from it. Generally, I think it’s better if one doesn’t just watch shows to follow the Zeitgeist, but to find the ones that one finds genuinely interesting. If the two overlap that’s great, if not… well, you’re watching stuff you’re interested in instead of simply watching something just because everyone is watching it.

Ah, Wolf’s Rain! That’s at least one I have rewatched fairly recently! In fact, I wrote a review for it last year on Anime UK News that I poured a lot of myself into https://animeuknews.net/2018/06/wolfs-rain-review/

Anyway, in general, I guess I just don’t rewatch anime (or any TV series, really). Gankutsuou is a good example of a series where I loved it when it was airing but then just… moved on. Up until last month, I’d pretty much forgotten it even existed, which looking back at it now is just crazy. It’s so, so good. I need to remind myself to revisit stuff like this, because I have a tendency to feel bored with anime, and forget that stuff like Gankutsuou exists. It’s okay to revisit a story, it can still be good and relevant.

I’ve ended up not amazing a huge MAL compared to other fans because of my tendency to rewatch. It started out as something I did in tandem with watching new things or things that I skipped out on in previous seasons but as time has gone on I’ve found it really hard to get into new anime so I almost exclusively just watch things again now. Sometimes this means I’ll fall out of love with a series and other times it means I’ll come back with an even greater appreciation (I think most of my top 10 only made it to that spot upon 2nd or 3rd viewing).

Recently (as in two years ago) I picked up Madlax again because I was hoping to get inspired for a series of covers that never really materialized (though I did manage one). I know that Bee Train is generally regarded as trash by the anime fans who even remember its existence, but despite a lot of silliness I found I really liked Madlax some 10 years later, and find it to be a better show than the marginally better regarded Noir. What I realize that I miss about the immediately post Evangelion anime is how obsessed with trippy purgatorial places anime of the time were. Maybe part of why I don’t like new anime now is in part because of how literal and lacking in spirituality they are by comparison.

Just finished a two day Kaiba binge as well on Blu Ray this time. 5th or 6th time around there were some parts that maybe left less of an impact on me but I still adore it. This time around I think I found it a bit easier to digest thematically, but that would take many more paragraphs to summarize.

Gankutsuou is one of those on my need to rewatch list (which only seems to expand more than it shrinks). It’d be a nice one to have on Blu Ray.

I never did watch Noir or Madlax. It’s kind of weird to think how no-one seems to talk about them at all now, same with Bee Train. I will give them another shot at some point!

I think there’s still a lot of good new anime, but the more anime you see, the harder it is to stomach the merely average stuff. I used to watch 4-6 new anime every season, now it’s reduced to like… 2.

Anyway, thanks for linking your YT channel. I’ve subscribed. Keep it up with the music! 🙂

> who the fuck is talking about Gankutsuou?

I want people say that about Hand Shakers in 5-10 years.

This list isn’t necessarily weird anime. Just anime that draws me back.
Whisper of the Heart is one of my favorites and one that I revisit regularly.
Kino no Tabi.
Anything by Studio 4C is worth revisiting.
Cross Game is one that I’ve been wanting to watch again.
Kappa no kaikata is a weird anime.
I’d love to watch Planetes again.
Mushishi of course.
Anything by Satoshi Kon.