The only way I can think to describe Megane is “a movie for B-type personalities”. It ambles along at a pace that – to the outside observer – seems foreign, but somehow fascinating. Other than that, it’s hard to pin down. The film builds its own internal language of keywords and signs, yet offers the viewer no interpretation or meaning, remaining neutral. The meaning, of course, is that there is none: things like signs and symbols, even when presented with the intricacy seen in the likes of Megane, are meaningless.

END_OF_DOCUMENT_TOKEN_TO_BE_REPLACED

What is the Cowboy Bebop ending trying to say? It feels like such a waste! Spike doesn’t have to face Vicious, he could just stay with Faye and Jet, leave Mars and fly away, but he doesn’t.

No matter how many times it’s replayed, there will always be that choice hanging over Spike in the end, but then, isn’t that why Cowboy Bebop‘s still so fascinating? Consider Faye Valentine.

END_OF_DOCUMENT_TOKEN_TO_BE_REPLACED 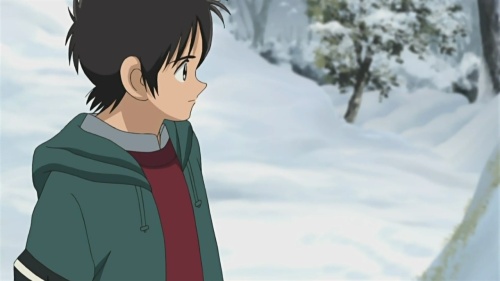 When writing about Fullmetal Alchemist: Brotherhood, I noted that I think it’s great because it has moments of exciting, fluid animation. I realise that’s a fairly superficial thing to say, but I think it’s true, too, and now, as if to immediately contradict myself, I’m going to write about Cross Game.
This doesn’t have great animation, but it’s probably going to be one of my favourite series of 2009, because a delightful story is always delightful, regardless of medium, and because I’m really into these characters. This has nothing to do with being swept up by some soapy drama or romance or whatever, rather, I like it because it’s understated.
Cross Game is a quiet series, so quiet you can hear the wind breezing through fallen leaves and hear the snow crunching underfoot. At its centre is Kou and Aoba; there is no blurting out of their feelings or forced confessions of love, everything remains unsaid, unrealised, with just a moment of hesitation here and a shy glance there.
Their feelings are protected, hidden even from themselves. They have a determination about them, yet seem introspective; they remember things, tiny, stupid, important, vital things, like we all do, before clamming up again. It’s sweet to watch them blunder through uncomfortable situations, but reassuring, too. I think we’ve all been there, spent a lot of time observing people and watched as the days draw into night. Life can be so understated, and such is Cross Game, it’s so quiet. 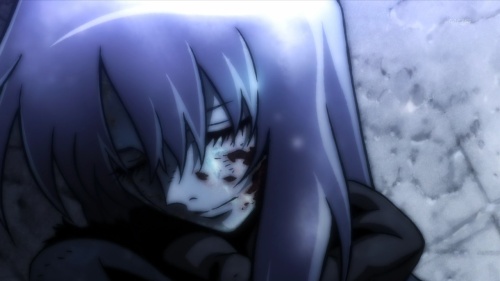 Knowing that some day you will die is not a prospect that one’s thoughts tend to dwell on, but in Casshern Sins, when death is everywhere and the land is ravaged with decay, that your life will some day end is impossible to ignore. It’s a feeling that I often get from this show, but far from ever seeming hopeless, each episode has an ephemeral, poetic warmth; refusing to linger in depression, it cherishes life, with color, and beauty, and sound. It is a joy to watch.
Flowing in this vein of hope, Margo’s own obscure achievements in episode 12 are typical of that irreplaceable essence of life. Just like any other robot in Casshern’s world, elegant Margo is slowly dying of the ruin, but instead of quietly accepting his fate, he keeps on going. In the throes of death, his elegiac last words reveal his heart’s truest motivation, “I wanted to leave my colour on my city”. It’s inspiring to think that he just wanted to be remembered, to leave a mark that proves that he was alive.
This was such a heartfelt parting sentiment, that honestly chimes with my heart, and exactly the kind of pathos that has me convinced that Casshern Sins is great. 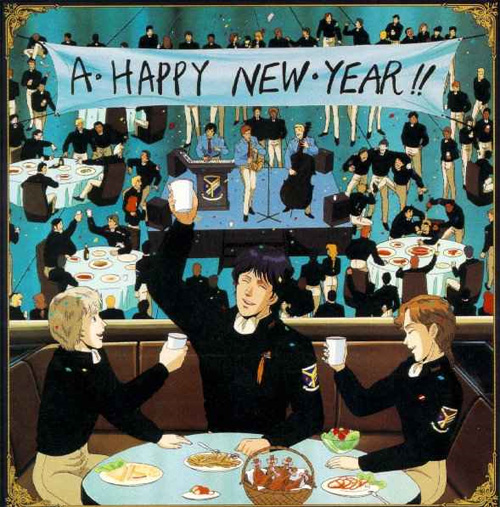 There’s no specific point to this post, but for a few days now, I’ve wanted to write something for my blog, and thus, here we are, dear reader. It’s just that time of the year, I guess; a blank page and hours to spare. Themes or no, after nearly three years of doing this, I can’t help but feel a tug at my heart to say at least something before this year’s end. So, here we go.
Perhaps the logical thing for me to do would be to write a year-in-review list or some other vague spin on that lovable tradition of anime blogging? But I don’t feel like doing that this time around, I’m more concentrated on what I’m watching right now, like Legend of the Galactic Heroes. It’s perfectly apt that the last anime I’ll finish in 2008 will be the one I’ve been locked in battle with since March. I’ll probably be relieved once it’s finally over, but probably a tad nostalgic too, because it’s always with such a bitter-sweet feeling that I let go of a story after such a long journey.
Another of those bitter-sweet journeys was Toward the Terra, which, I’m excited to note, I’ll (hopefully) be revisiting over Christmas via the original three-volume manga series, To Terra. I’m finding that my fascination with this story is an odd thing, really. It’s not easy for me to pin down either, but considering my feelings for a while, it may have something to do with the flow of time within the story.
Like in Gurren Lagann, where the characters seem to visibly age, grow into better people or terrible villains, but always changing. The same can be said of the thousands of years that pass between the stars in Gunbuster, or in Orson Scott Card’s Ender’s Game. Such a clear and inevitable sense of flowing time, the characters’ lives, their dreams and ambitions, as brilliant as they may be, are so immensely small and ephemeral when set against the sheer magnitude of space and time. In such obscurity, it would be easy to give up, but these characters never do, they keep on going.
For me, that’s such a comforting sentiment, especially at the close of another year, where the subject of time progressing is literally the reason to party. So, if you celebrate it, I hope you have a great Christmas and, of course, a happy new year too. Ah, go on then, what did you get for Christmas? I hope you gave some awesome gifts, too?