After Life, directed by Hirokazu Koreeda, is one of most interesting films I’ve seen. Set in an (unspecified) purgatory, it’s about dead people choosing one memory (and one memory only, the rest fades) to carry with them into (an also unspecified) eternity. Upon choosing, that memory will be recreated on a film-set and recorded with you as the star. You take the resulting VHS with you. The recreation is a massive team effort, with actors, props and all kinds of film-making devices.
If you can’t choose a memory, or simply refuse to, you become a part of the staff at purgatory, helping others to move on. One man has trouble choosing his memory, and so is given a big box of VHS tapes (containing his entire life) that he spends his time pouring over, trying to remember the things he did in his lifetime. Searching for something big and meaningful, eventually, he just chooses a memory with his wife and him; an old couple, sitting on a park bench, talking. The small things can mean so much.

The people in purgatory eventually just vanish. They choose their specific memory, star in its recreation, and then just… disappear. The last episode of Angel Beats! reminded me of After Life, too. 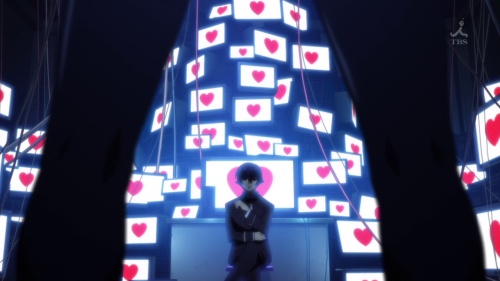 Similarly stuck in purgatory, the kids in Angel Beats! aren’t yet ready to let go of life, but they, too, eventually just vanish after finding a sense of contentment or inner peace. In the end, there’s just 5 students left in the empty halls and corridors. They stage a mock graduation ceremony, say their goodbyes and finally, exit, one by one, into whatever lays beyond.
I was hit by a massive sense of transience in this moment because that’s just what happens in a person’s lifetime. We’re constantly saying goodbye to the people we meet, our friends, family, school-mates and work colleagues. One moment they are here with you and then, nothing, but a memory. This is particularly clear after graduating from school, when classmates of more than 5 years just tend to disappear into whatever their lives have lined up for them.
It’s a natural thing, but quite sad, too. One just need look around the internet’s anime community to see it in full effect. The abandoned blogs, muted Twitter and forum accounts. These people just disappear; the whole point of being an “anime fan forever” is that I’ve always been counter to that notion of disappearing.
If the anime blogosphere is a living purgatory, then the bloggers are the helpers, themselves stuck, but willing to point others in the right direction. As we see our friends come and go, sometimes it feels like there’s only a few of us left, but seeing people change is fulfilling in itself, and there’s always new people to help. And the same old faces, too; seeing a change in them is the best of all.
But you aren’t ready to leave me just yet, right? Let’s keep going! Merry Christmas, my friends, and happy new year!