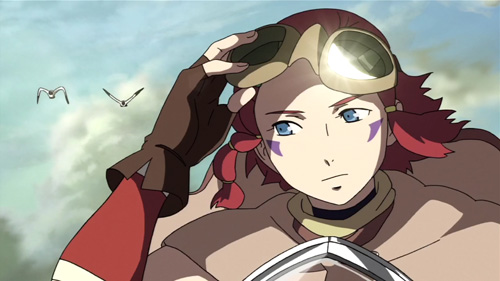 Should I say Xam’d: Lost Memories is good? It’s better than good, and I know it’s not enough to say just that, but I have to be careful. Because I’m about ready to explode. Yes, there’s too much to say. This is what anime is capable of; it’s why I’m writing an anime blog. Ironically, I’m on the brink of incoherence, but I need order, I need someone to understand something; that Xam’d: Lost Memories is good and that I think you might like it too. But that’s still not enough.
Where to begin? How about the trailer. I’ve been admiring this series since reading the trailer’s subtitle of “A nostalgic SF by Studio Bones”. Of course, a lot of anime is nostalgic, but it’s typically nostalgia for youth, for young love. Xam’d is nostalgic for science fiction. Our heroine Nakiami recalls both the rural appearance of NausicaÃƒÂ¤ (of NausicaÃƒÂ¤ and the Valley of Wind) and the emotional ambivalence of Eureka (of Eureka Seven). So, right off the bat, those are two of my favourite anime. It seems I was fated to adore this show. 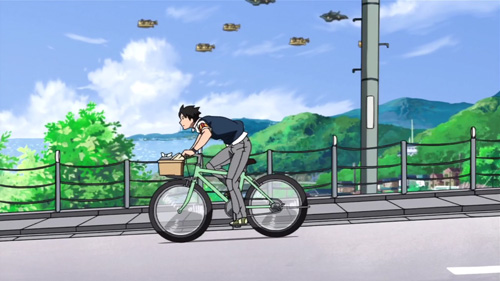 The direction has an air of confidence, the narrative flows naturally, the plot is slow-building and consistent, the characters are light hearted and funny, some concealing their insecurity with a spunky attitude, others with sarcasm, none of it feeling artificial or calculated, just natural, normal. By the time the action kicks in, about three quarters of the way through the first episode, I was immersed, lost in the fantasy, in the characters, their lives about to be torn apart. 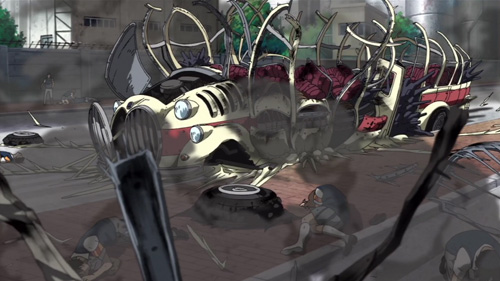 The school bus explodes, it’s a suicide bombing. Terrorism. Fear spreads. The twisted wreckage of what’s left behind is more like an open ribcage, bloodied, facing skyward. The seats have a bubbling, organic texture. Strange flying machines float high over-head, launching their organ-like pods of insectiod attackers into the city below. Akiyuki’s arm swells and twists with a strange, alien infection, his trembling body is no longer his own.
It’s a shock to transition so violently from this sleepy, easy-going slice of life into a terrible, chaotic war, a situation that reflects our own fears of terrorism and paranoia of aggression that is indiscriminate and seemingly aimless.
Akiyuki’s mum is a part of an ensemble of likable and interesting personalities. Her marriage is falling apart, but she maintains a strength of character, humour and dignity that’s really quite admirable. Akiyuki’s dad is a workaholic; a popular doctor with time for his patients but none for those most important to him, his family. They both care deeply for their son, but show it in different ways. When he goes missing, they both go looking for him, but at different times. They understand each other, but pretend not to, neither willing to compromise with the other. Little do they know, Akiyuki has embarked on a nostalgic adventure. 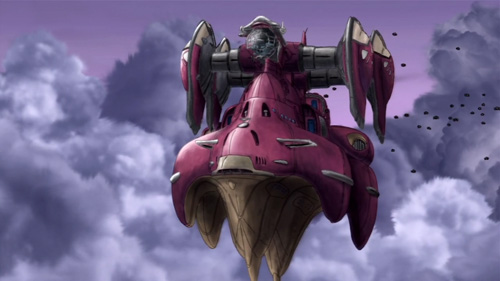 Flying high in purple skies, I’m happy just watching this story unfold, like some long lost fable, it’s beautifully drawn, sometimes poetically so, dream-like and awe-inspiring, a world worth exploring, with its many strange cultures, creatures and technologies. It is a fantasy in the truest sense of the word, a world of fantastic imagination, dark and light, nostalgic and exciting, would be perfect if there wasn’t so much rust in the water.