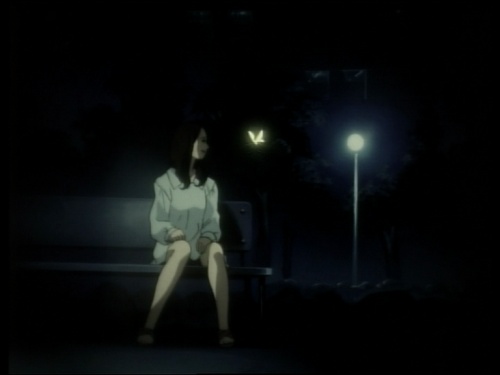 The coolest thing about Boogiepop Phantom is that it’s just really fucked up. Too often in anime are teenagers romanticised. Everything’s so sweet, so melodramatic; no permanent damage. It’s just easier to watch something like Toradora, where everyone’s so cheerful, ready to communicate and fix their problems.
Nothing festers in your typical anime high-school; feelings, conflicts are all out in the open, ready to be tended. It’s false bullshit, but we watch it because it’s happy and safe, because there’s always an answer, and the characters will always turn out okay, smiling in the end. We know it’s coming and that’s fine, but it lacks an edge; seems to be more like a dream than reality.
And you wouldn’t willingly escape into a nightmare, right?

Boogiepop Phantom is from the other side, twisted enough to admit that not everyone is going to be alright, teenagers especially. Love can turn bad, things can go wrong, people can be depressed and weird and without hope. Everything can go off the rails. That’s just life.
Anime doesn’t always have to be easy to watch, and this certainly isn’t. The names and faces are hard to follow, camera angles disorientating and lack focus, the soundtrack inconsistent and artificial. Boogiepop‘s mysteries are disturbing.
A huge pillar of light strikes down in the middle of an unnamed city, the light, reaching as high as the eye can see, is illuminated against the night sky. There’s no explanation, it just happens and then people get on with their lives; going to work, catching the train to school; gray skies, packed carriages and the pulse of electricity. Modern life.
This is an odd series, a dark, ambiguous diamond in a sea of good vibes and happy endings. I’m really enjoying it.

8 replies on “Why Boogiepop? You wouldn't willingly escape into a nightmare, right?”

I enjoyed Boogiepop Phantom lots, I’m told you have to read the light-novels to really understand stuff, but I too got kicks of out its confusion and ambiguity.
Recently a post on Shameful Otaku Secret (on Utena) used the phrase “dreamlike logic of acceptance”, which I guess applies to lots of fantasy-ish stuff where threads seem to lead on in a reasonless but somehow right-feeling way. For me Boogiepop’s wrong-feeling madness packs an excitement similar to the joy found it that sort of Lewis Carrollish dream reasoning. Maybe I’m just a sucker for the soundtrack and visuals, but there’s a thrill in the idea of reason behind the madness.

While reading the novels would clear up a lot of the ambiguity, I think the series is very internally consistent and answers almost all the questions it poses. In many ways the tv series is better than the (translated) novel because the parts are more disjointed, giving us more pleasure putting the pieces together.

Wooo Boogiepop Phantom! I like your post title, because the characters of BP are trying to escape from the reality as well, which is nothing but a nightmare.
I used to think its overly complicated nature (including similar character designs, sheer amount of dates/places/events/names to remember, and the timeline that jumps here and there) were all part of its flawed story-telling even though I was intrigued by it, but I don’t feel that way now. It ties well with the kind of mood and psyche BP wanst to depict, that of confusion, frustration, and works well with its nosy soundtracks and misty visuals.

I’m really in love with Boogiepop’s opening theme right now.
@coburn
In the case of a series like this, the soundtrack and visuals are so important. There is depth and feeling to Boogiepop’s aesthetic, it’s fantastic in that way– and very much like the great MÅryÅ no Hako (no surprise they share the same writer (Sadayuki Murai) and animation studio (Madhouse)). And I’m totally a sucker for anime like this.
@Piper
Totally agree, at this point I’m savouring every single episode (just watched episode 6) as the stand alone works of art they are. IMO, this is a perfect series. I’m probably going to buy the novels too (that is, provided they are still available!) because the overarching story is fascinating, but the anime and the novels will always be two separate beasts.
@gaguri
I wonder what I’d have thought about Boogiepop a few years ago? I’m not sure I’d have given it the time of day, yet here we are today. This is a great series, and you might want to revisit it sometime– particularly within the context of MÅryÅ no Hako. I can’t believe it has taken me this long to watch it!

@Piper –
I prefer the light novels. The anime is good, but many scenes have no point if you have not read the books. For example, the last episode and the key role of Kazuko Suema – there was no need for that, Suema was not important in the context of the anime TILL that episode. Second, there were some misinterpretations on the anime part – Echoes’ ability to speak was not limited by Towa (as the anime wanted us to believe) but by God, or whoever his master was. Or so I understood while reading the first novel.
Generally, the characters are WAY better in Kadono’s novels, and it is what counts, for me at least.

Well said. I didn’t think much about the Boogiepop anime as, for lack of better phrasing, it confused the hell out of me, but I read the novels and I definitely like the story. Your description of the atmosphere and tone of the show is apt, and I think that’s what sets it apart: it’s bizarre, unsettling, and above all, mysterious.

Always glad to see new Boogiepop fans! I’m a diehard follower of the series, and it’s true, you REALLY have to read the light novels, less for explanation since they are way more deep and confusing than the show, but because they are amazing. The first novel, Boogiepop and Others, remains my favorite piece of fiction ever created.

[…] understand. An undercurrent of desperation and suicide. It has much of the idiosyncratic rhythm of Boogiepop Phantom, but probably lacks the visual […]